Buccaneers of the Damned

Swashbuckling on the lost Island of Salvation!

“The journey was going well, The Heron and her crew were making excellent time and the anticipation of a new life in the Americas for those on board was almost tangible in the air.

The freak storm came out of nowhere. The Boatswain wailed that it was a ship killer – unnatural, furious, God’s wrath coming for whatever Jonah they had among the passengers. Then, with a crack like a cat o’ ninetales, one by one the rigging snapped from forecastle to quarterdeck. A great scream filled the ears of everyone on deck, joined by their own screams when they realised what it was – the mainmast ripping itself apart; held in place for a moment by the remains of the rigging and then…

You wake up on a broad shore, your face in the warm water of the shallows. You cough, heave up the water that feels like it’s still rattling inside you, roll over onto your back and feel the morning sun on your face.

Welcome to the Archipelago.”

Hello and welcome to Buccaneers of the Damned, a game of pirates, seafarers and the unimaginable terrors of the new world!

Buccaneers of Damned is a “film-sim” style game, with many linear adventures falling from a central story hub. Rather than ruin the experience of learning a new world by making you scroll through pages of background lore, new players start with a small amount of background knowledge. We allow the game and plot to grow organically, encouraging you to establish yourself within the story, filling in the gaps as you go.

Everyone starts with the same amount of in-game information and we encourage you to explore from there. The setting we have chosen is made up of an Archipelago of islands and is large enough to give us years of wonder, mystery and adventure as the story is shaped by the players.

Like everyone at their first game, you will have to spend some time finding your feet, but we also believe some of the very best role-play and stories come from the experiences at your first event; regardless of the other players, how you interact with the game from this point on will set your direction for the future.

Buccaneers of the Damned is a gritty swashbuckling enterprise, with elements of horror and intrigue by the bucket full. Come and join the fun! 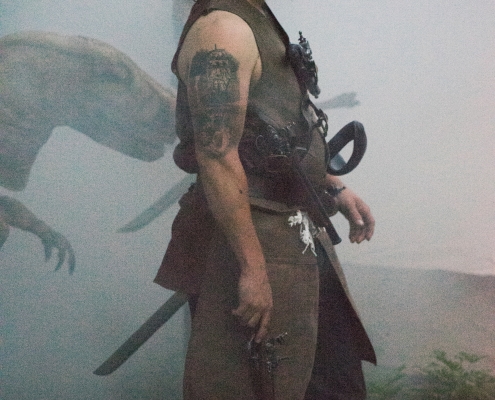 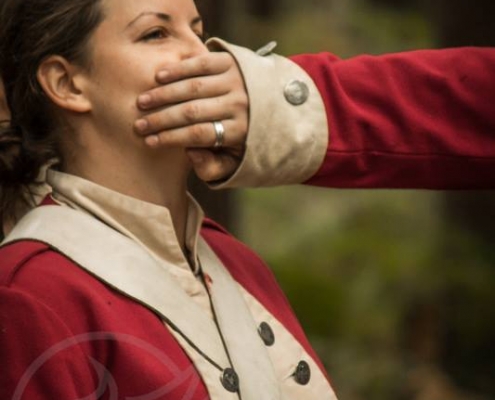 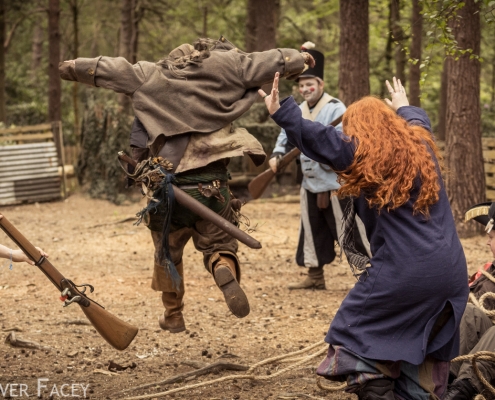 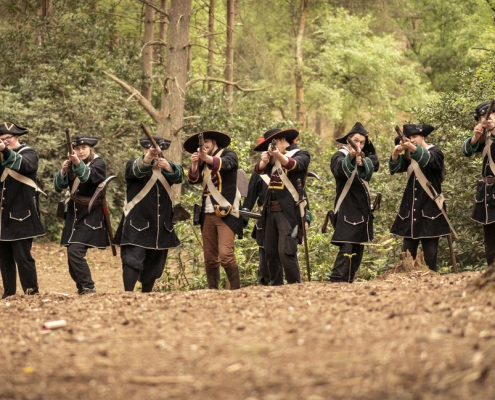 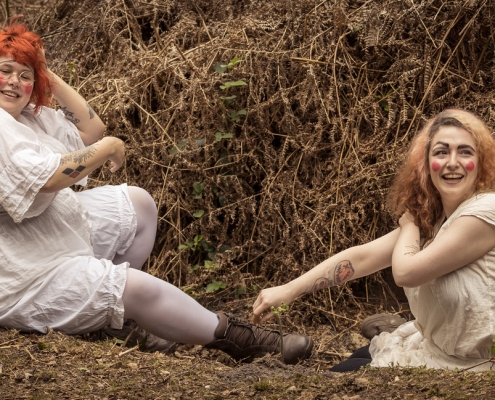 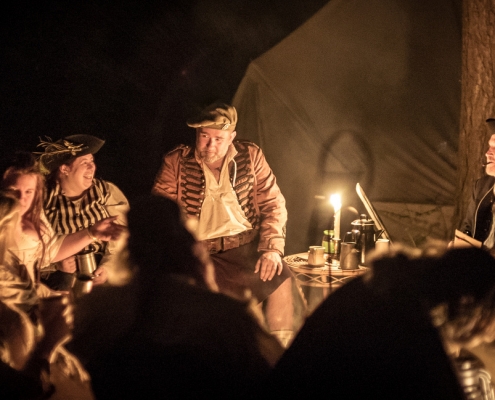 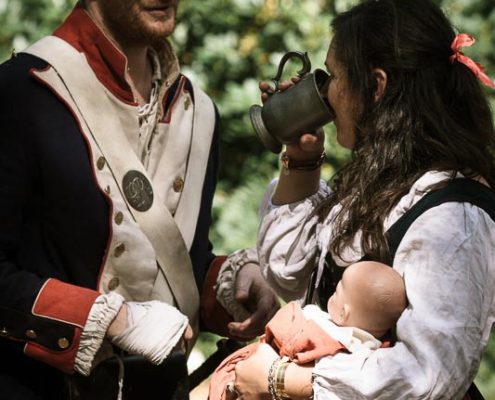 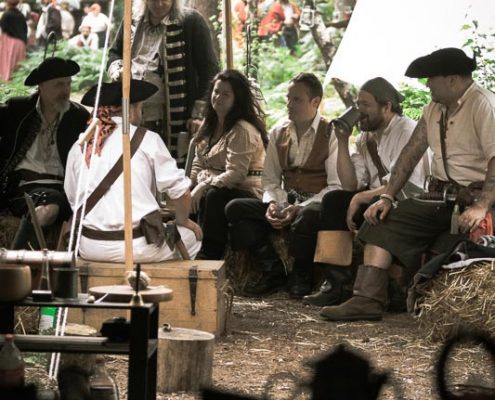 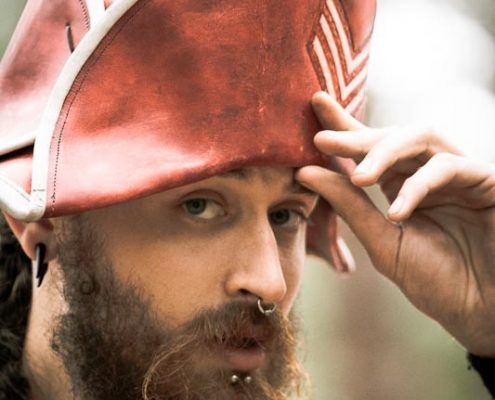 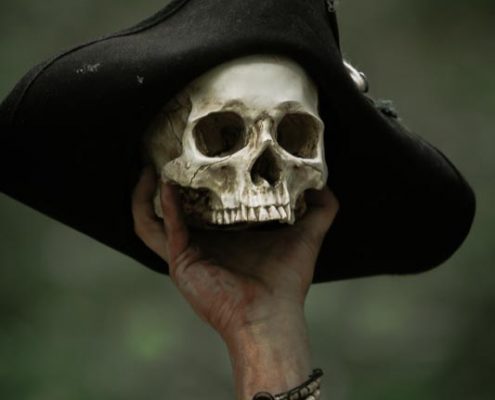 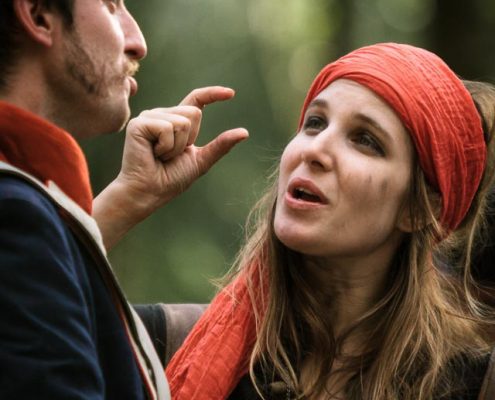 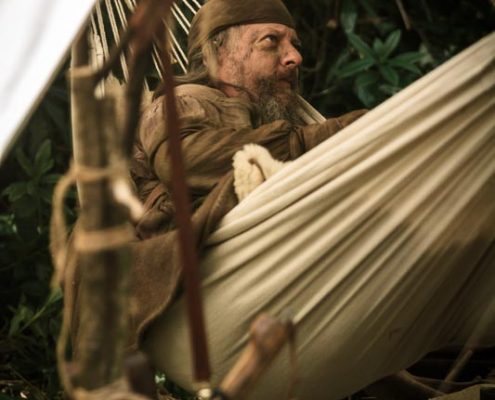 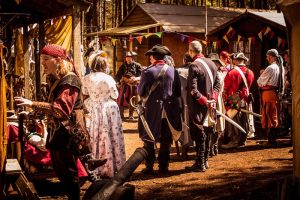 Come join us at our next event! for more information, email us or find us on Facebook.

Before each event, new players will be briefed on how they arrived on the island. However, we think it helps to understand a few basics to you ease into the game.

You set sail from a location in the real world (London, for example) and ended up here. Where is here exactly? Unfortunately, you’re off the map, just past the area that would traditionally be marked ‘here be dragons’!

Unless briefed otherwise (and you may well be!), you’ll be washed up on the island of Salvation in the area around Logan’s Bay – a shipwrecked survivor of a ship called ‘The Heron’.

Salvation is one island amongst a chain of islands. Each one is controlled by a different power (survivors from the ‘real world’ who have banded together to re-establish some form of civilisation). The powers include The French, The British, The Barbary Coast, The Dutch and The Portuguese.

You might even run across more people as your adventures progress.

Film-sim is a rules-lite theatrical, cinematic style of play adopted across the board by Eye Larp. For Buccaneers of the Damned, think Errol Flynn and the swashbuckling epics of the 30’s and 40’s!

There are no calls, no hit points and no bleed-counts. Eye Larp aims to encourage epic role-play and an organic style of story-telling, to make the combat exciting and remove the elements of number-crunching  found in other systems. Rather than a list of calls a hit-points to memorise, we use just one basic rule: “React to everything, but don’t expect a reaction”.

Here we try and answer some of the most common questions from new players. If there’s something we’ve missed, don’t be afraid to ask!

To help you with ideas for your character, we’ve listed a few ideas below:

Some skills that your character may have might include :

First Mate of the Scarlet Jones, Aggie’s a Doctor and formidable with a frying pan!

Captain of the French Royal Marine. Leading his men, he maintains order in chaos.

Makes friends everywhere he goes. Diplomacy and tact a speciality.

French soldier. Not wearing his uniform any more

Captain of The Scarlet Jones, cook and dammed nice fella, never stabs anyone, ever.

Captain of the Fox, a truly inspirational lady of poise, charm,  and a musket called Jemima

Press-ganged, rose to rank of master gunner during War of the Spanish Succession, gunpowder expert.

Known to his friends as ‘Tigerlilly’. He is of the land, and is one with it.

Shiny except stong as four men smart as dog

When “Fullofmen” goes wandering off into the woods, you can be sure that trouble will find her…

Quartermaster/Shanty-woman aboard The Black Swan. Quiet demeanor, subtle laugh, no threat to anyone.

AKA The Mad Dog or Blood Hound, Michel is an ex-member or the french army.

Used to write for a living. Now writes to attempt to remain sane.

A French noblewoman and physician. Joined the Tubby Fox’s joyagers. Believes in Science.

Ex-Marquess, proven to not be totally useless. Banker, seamstress, healer, and a Heart of Gold…

Private Pickering
What doesnt kill me makes me stronger, or hungover…..very very hungover.