The year is 2170. The Earth’s magnetosphere has failed, leaving a sprawling collection of colony worlds competing for resources in an ever-violent galactic struggle. The old Colonial Administration struggles to hold the fragile peace together while political factions, corporations and separatists threaten to overthrow the old Terran regime. Only one force stands ready to face these challenges head-on, to wade through the mud to stand between order and chaos.

They are the men and women of the Colonial Defense Force Marine Corp.

Gruntz is EYELarp’s futuristic sci-fi action LARP. Digging deep into 80’s action movies for inspiration, players join the fight to protect their colonies from the dangers lurking on the last frontier – armed only with a pulse rifle and bad-ass one-liners.

Gruntz has a slim rule-base, uses airsoft and encourages players to get their arses on the line and take the fight to the enemy – be it through combat, tech or medical skills. Crewing is free and oodles of kit is available on loan. More information is available on our Facebook page. Pics from Ep 1 are here. 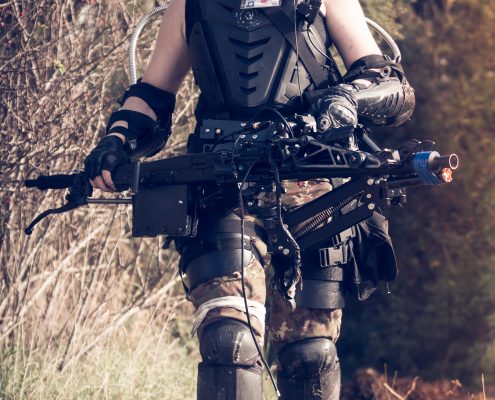 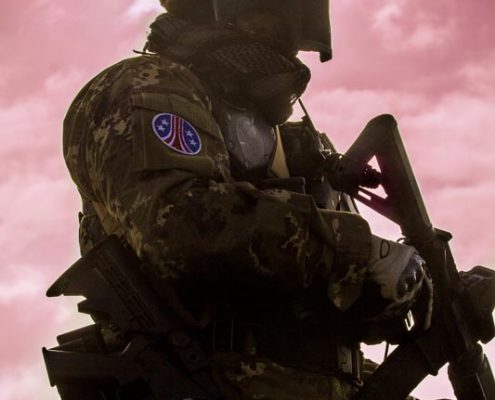 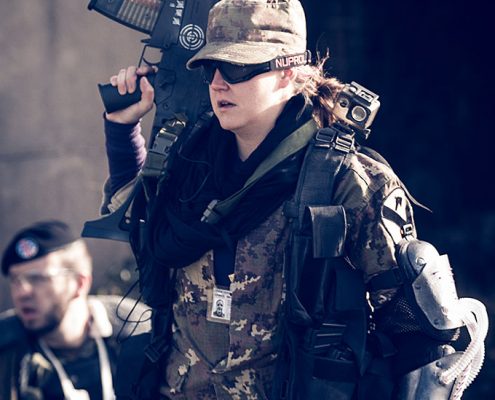 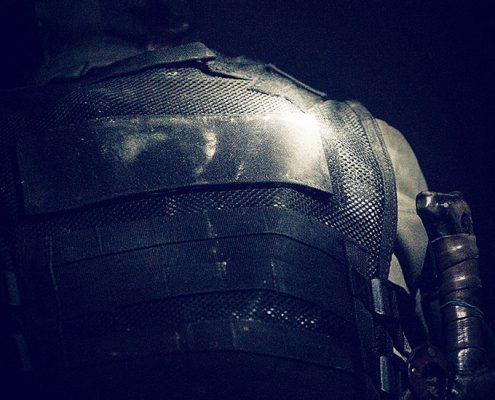 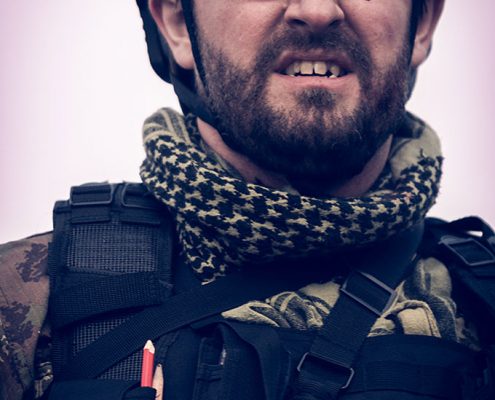 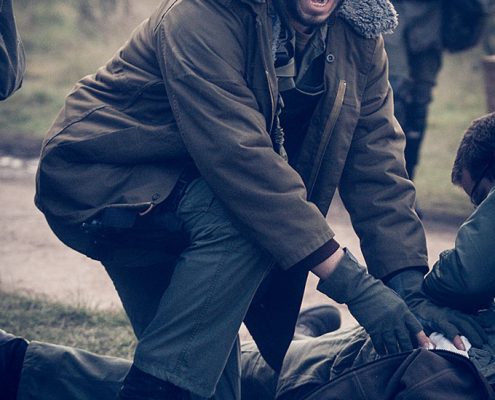 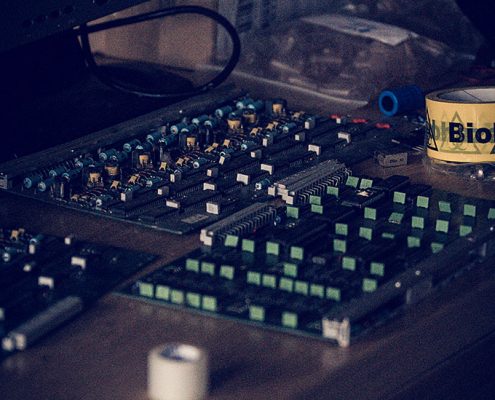 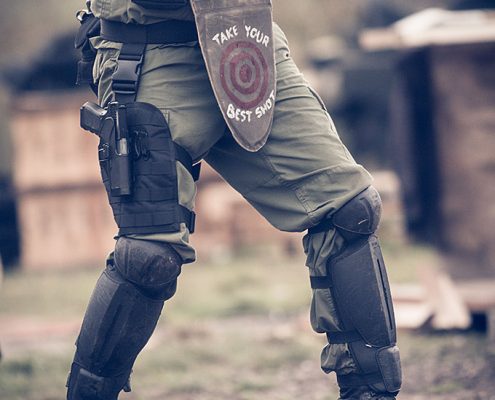 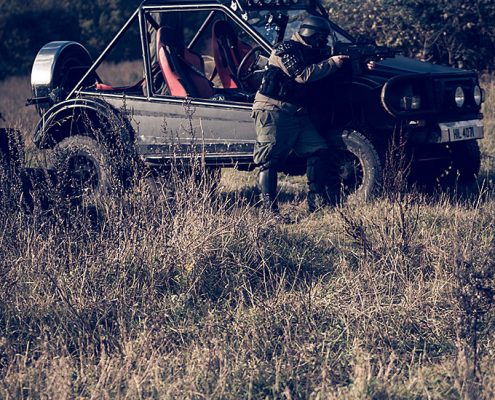 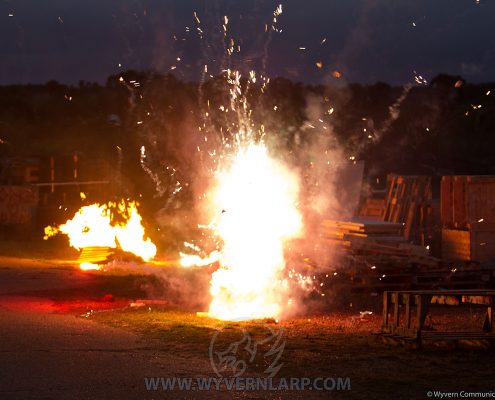 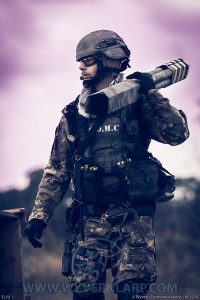 Each event will follow the adventures of Platoon 2Bravo of the CDFS Dick Cheney’s Colonial Defence Marine Corps contingent.

Marines, and supporting non-combatant staff, will deployed in defense of their home colonies. Adversaries to date have mainly been rogue replicants, but evidence and rumours are emerging of corporate interests pulling the strings.

The bulk of deployed assets will be the eponymous Gruntz – footsloggin’ rifletotin’ badasses – though there are a limited number of supporting roles for corpsmen, heavy weapons troopers and squad leaders. Depending on the scenario, there may be roles available from other agencies.

The system also uses airsoft weapons to simulate combat – but the emphasis of the event is a LARP, not a skirmish! The weapons are part of the characters, not the main reason for  the game. Also, airsoft guns are available on loan for players who may not already have one.

Players are encouraged to get into the mindset of the Gruntz for the event – bad one liners and outrageous heroics are encouraged – and remember: Never leave a Grunt behind!

Key bits of info and rule mechanics are set out in the docs below. Notes, queries and updates will also be communicated through the Facebook Group.

Kit and role guides will be provided to crew in advance of the event, but as always the EYELarp kit wardrobe will be flung open for crew use, including loaner airsoft weapons.

If you’d like to crew, drop us a line.

EPISODE ONE: THE LONG NIGHT

— Incoming Message —
— Origin: RS-228; Wolf 359 —
— Message Date Stamp: 07:08.03.11.2170 —
— Message —
This is an S.O.S distress call from research station Romeo 14. There has been an explosion on our launch pad. Several of our techs are dead. Many wounded. Secondary explosions and possible gunshots have been heard at the perimeter fence. Please assist. This station is unarmed. There is no comm-reply from nearby PMC response outpost. For the love of Darwin, help us.
— Message ends —

All is not well on the agricultural moon of RS-228. Thankfully, as an urgent plea for help echoes across space from the isolated Romeo 14 medical research centre, a guardian angel slinks silently through the void ready to answer the call. Slowly, the Type 42 Strike Frigate CDFS Dick Cheney, pride of the Core Systems colonial fleet, fires its manoeuvring thrusters and sets a slip-space course for the Wolf 359 star system.
Such mercy missions are always a step into the unknown. Be it battling pirates in hard vacuum or rescuing colonists from natural disasters, the marines of the colonial defence force are humanity’s front line in the treacherous reaches of deep space. Drawn from all nationalities and creeds, the marines of the CDF care little for their differences. Together they are a brotherhood, with the most common thing in common: They are all just Gruntz.

Intel on the ground suggests that local Weyland-Yutani personnel have been experimenting of variations of the Rampancy virus that causes older generation mk 1 and 2 Tyrell corporation replicants to malfunction. The director of the facility, doctor H. Landstrom, admitted under interrogation that Weyland-Yutani were attempting to mutate the virus to shut down and destroy all rogue replicants suffering from Rampancy. Live testing on a mk 2 Niobe series replicant proved this to be viable, however, some doubt remains as to the full extent of this virus’ applicability to other replicants.

2Bravo also recovered a prototype device known as “The Sequencer” that was intended to create an air-dispersal device for the mutated virus. This sequencer had fallen into rogue hands and was being used to replicate biological weapons for use against humans.

Extraction was finally made possible after 2Bravo located and destroyed a captured surface-to-air particle missile system that had brought down a marine bird some 12 hours earlier.

Among the colonists rescued, 2Bravo obtained one human prisoner, confessing himself to being a member of the pro-synth underground movement “The Eye”. Under interrogation, this man admitted to transmitting the location of nearby habitat Sanctuary’s defense grid generator to the replicants and smuggled an IR targeting beacon into the station, allowing enemy forces to shoot down our first extraction bird.

Unfortunately, doctor Landstrom was hit during the extraction and 2Bravo’s medics were unable to revive her. When doctor Landstrom’s body was inspected by CDMC medics, it appeared to bleed white…We request instructions.
This is Truman, captain of the Dick Cheney, signing off.

CDFS Dick Cheney, redirect your course to RV with CDFS Le Carre immediately to transfer all colonists and materials retrieved from Romeo 14. As of now this mission has been classified De-Compartmentalized and is not to be discussed, even within 2Bravo. You are also ordered to place a level Magenta lock on all logs relating to this operation.