Gulag: Eagle 13 is Eyelarp is a game based on a natural disaster that caused an apocalypse felt the world over.

We’re are taking inspiration from suspense-driven apocalyptic films such as ​The Happening, A Quiet Place ​and​ Bird Box, ​and also from disaster films such as ​The Day After Tomorrow, Snowpiercer ​and ​Children of Men ​and video games such as ​The Last of Us.
The idea of Gulag: Eagle 13 is to survive against the elements in the world that now exists and try to start living again.

As always with EyeLarp’s FilmSim games, we are encouraging high production values and will be striving for a cinematic feel and look to everything we do. The main rule is: react to everything and don’t expect a specific reaction. Its been five years since a natural disaster that sent the whole world into darkness and a global apocalypse, people who survived find themselves trying to head to colder climates, many have reached the State of Kaliningrad, an ex-Soviet Union exclave bordering Poland, Lithuania and most importantly the Baltic Sea, with news – now passed from person to person travelling in the wilderness of Europe – spread of a unified government or regime that had started to form called the Baltic Bloc. They offer safety, survival and a chance to not just to survive but also to live.

Your character is heading to the safety of outpost known as Eagle 13; at which you hear there is a safe place for you where civilization is slowly going back to some semblance of normal

We at Eyelarp would very much like Gulag: Eagle 13 to have the fullest immersive feel, we are having this as a blank firing guns only, however here will be no fire arms to be brought into game by players, bows are useable at this event with a max pull of 30lbs. Players will also only be allowed to carry one large melee weapon and one knife or axe, weapons must look in keeping with the setting and larp safe.If in doubt, please see a ref before the start of the game.

we welcome you to join our Facebook Page for the game Gulag: Eagle13 this is a closed group just request join. 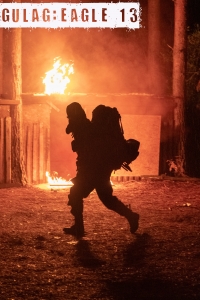 You are all in State of Kaliningrad, an ex-Soviet Union exclave bordering Poland, Lithuania and most importantly the Baltic Sea. It’s 2025, 5 years since the incident known as the “Mother’s hate” in which saw the collapse of the modern world as we know it.

survival. Your main aim to survive and get the next co-ordinates to the next way station

These are out lined in our design document which can be found on this page or on our facebook page Gulag: Eagle 13

This is the same as all other Eye Larp games, you don’t need to bring anything special (no eye protection as we just use standard Larp weapons)