The trip of a lifetime…

just hope you survive until wrap

The Oasis is a one-shot LARP set in 1933, with players taking the roles of the cast, crew, associated “muscle” and historical consultants on possibly the highest budget moving picture made to date.
The Director has spared no expense, not just on casting decisions, costume and cinematography, but locations too – rather than shoot in the Hollywood studio that has hosted his last few block-busters, he has insisted on taking a skeleton crew to Valetta, Malta, to await the arrival of a unique location…
Every 129 years, a natural phenomenon occurs – an island raises from the sea bed of the Mediterranean, with a fully formed, lush forest atop it. Many theories abound as to its origin, and also the myths that it may have inspired. Is it Atlantis, or the home of the Sea People who created so much trouble for the Ancients? Or perhaps evidence of the islands Odysseus encountered after the fall of Troy.
Either way, there is only one way to get there, before the whole island dives beneath the waves for another century and change.
_____________________________
If that’s whet your appetite, some OC information now:
The Oasis is inspired by movies set in and around the Golden Age of Hollywood, such as 1933’s King Kong, 2000’s Shadow of the Vampire and 1952’s Singin’ in the Rain, and also pulpy classics set in the 1930s such as 1999’s The Mummy and 1981’s Raiders of the Lost Ark.
It has been written as a one-shot – that is, we’re currently only planning to run it once, this August 5th-7th 2022.
In the style of Flying Lead: Nightmare, there is a high likelihood your character will not survive filming! There will be other opportunities of continuing to play the game – but dying in a suitably climactic, cinematic way is a part of the experience!
As with all our games, The Oasis is set on a fictional pocket of history to allow all potential players to have fun with the inter-war adventure aesthetic without worry of discrimination based on “historical attitudes”. Racism, sexism, homophobia, transphobia and any language or attitudes of a discriminatory nature are not welcome at our event.
We will be capping tickets at 40 players and 30 crew, and tickets will be available for the following four IC roles:
– 10x Cast – anything from the Starlet or the Grand Dame to the down-on-his-luck character actor desperately trying to revitalise his career
– 10x Filmcrew – barring Director and Cameraman, everything else is up for grabs
– 10x Security – bruisers and enforcers hired to ensure the studio’s investment is protected without a hitch
– 10x Consultants – those with an interest in the Island itself, who have signed up as their only chance to see this once-in-a-lifetime occurrence.
A full design document is in the works currently, and will be dropped in the coming weeks. 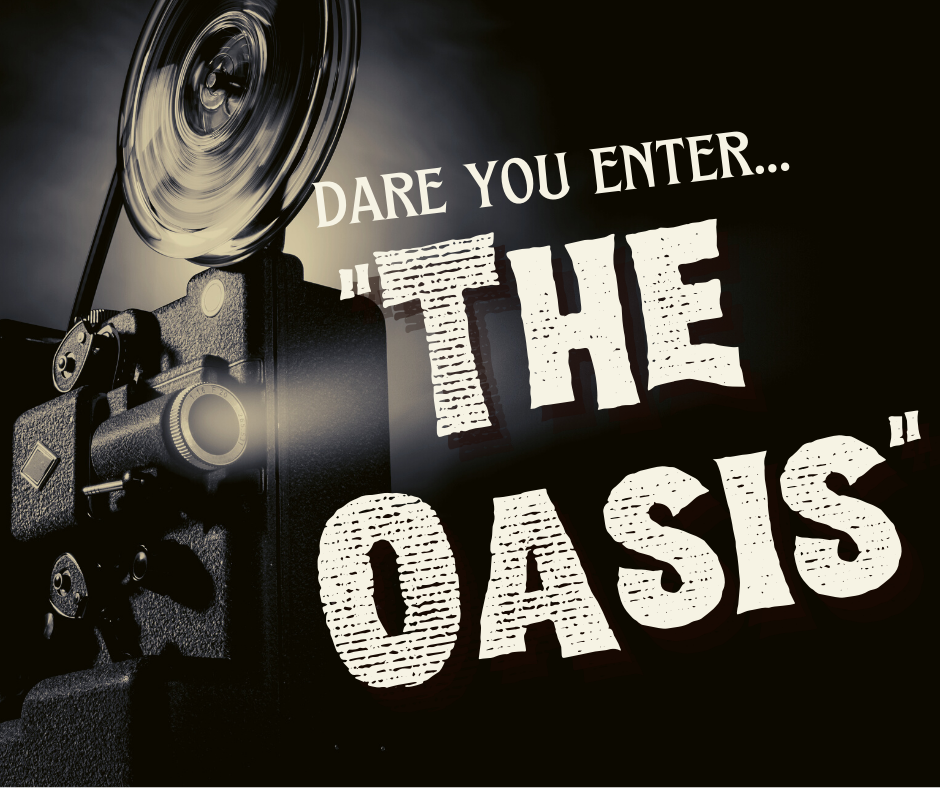 This contains the rules and character creation information

To find out more about The Oasis, please feel free to check out and comment in our Facebook group.

As with all EYELarp games, at the start of each event players will be briefed on Site safety and basic EYElarp Rules

When does the game run?

The Oasis is a one-shot event, taking place on the 5th-7th August 2022

The hours in between are “off game” or “out of character” hours where you are expected to sleep!

Where is the game set?

You play the cast and filmcrew of a 1933 Hollywood film. The game exists within a bubble of fiction, where we play with historical ideas and themes, without having to adhere to historical authenticity exactly.

Cinematic living and survival. Your aim is to survive the filming of an eccentric millionaire’s movie, on location in a mystical island.

Crew FAQ
General crewing information
Crew are on the go all day, usually playing many roles over the course of the weekend.
If you need to play a less physical role we can accommodate all abilities, ditto if you’re a combat wombat who doesn’t like talky roles.
Crew are fed breakfast, lunch and dinner Saturday and breakfast Sunday. We usually time in at 9pm on Fridays so expect crew to eat before they arrive.
Please let either the organisers know if you have specific dietary requirements.
We have tonnes of crew kit, so whatever the era and setting we’ll have layers to wear over base kit.
We have the benefit of several settlements at Eversley made up of community built structures. The agreement the community make is that everyone gets first dibs to stay in anything they build but it’s available to use otherwise, provided they treat it with respect and leave it as they find it. That means unless you prefer to bring your own tent, there’s often space in a bunkhouse.
You will need:
hopefully we’ll see you soon!
0Weeks0Days0Hours0Minutes0Seconds